I SURVIVED THE POLAR VORTEX on 2 Wheels

In this video if you listen closely I rub my pegs….;-)

On Thursday, November 13th I decided to take an impromptu, yet another Fall ride.  Had no idea what was in store for me  when I left on Friday.  You know when you think you have a sort of planned route in your head or even on your GPS and when you get to one crucial point in the ride you have to make a decision?  Well, when I got to the junction of Rt 5 and Rt 3 a part of me was like stay South.  But the ignorant, adventurous side said “NOPE” go North and so I did. The weather dudes said it would be cold all weekend but sunny.  I focused on the sunny part and banked on that.

Yesterday in Princeton, BC it was a frigid

That was the coldest it got on my trip.  My gear consisted of a Gerbings heated liner and gloves.  I brought riding jeans lined with Kevlar and my usual base gear along with my KLIM ski Gore Tex lined jacket and KLIM Altitude pants.  No heated sock or pant liners.  I NEVER imagined I would ride in these temperatures but the good news I was pretty much prepared to take on this new climate I had to ride in.  Once I committed to going North in BC I had to not only protect any skin from exposure to the windchill, I had to go North to get South on this route.

Stevens Pass from Leavenworth, WA was the worst pass I hit because of the black ice.  Other than that all mountain passes were dry, no snow and no ice.

Here is a video of Stevens Pass.  Hard to tell in the video but I am riding and hitting black ice often towards the summit.

Warm compared to the day before but still chilly on the bike.  Windchill plays a huge role while on the bike and if you don’t factor that in to match your gear it could be deadly.  Keeping my core warm is so important in the cold as it is in the hot weather to stay cool.

After I left Princeton and Leavenworth I noticed coolant spraying on the left side of my bike.  I called my dealer on Saturday to get some assistance as to where I should be looking for a leak but nothing panned out.  Still don’t know why the spray no matter where it was coming from only hit my left leg and bike.  I think it has something to do with the extreme cold.

In any case the rad fan was working, rad cover on snug as well as the coolant reservoir.  No obvious hose leaks that I could see.  I will have my dealer take a look but not sure they will be able to replicate the issue if the temperatures are not extreme in the lower mainland.  Just glad the bike did not break down.  Oh, and the EWS code I was getting on my last trip?  It was the switch and BMW replaced it under warranty.

After the bike warmed up the leak stopped anyway.  So, after taking another look off I went again.  The pass was beautiful and although it was cold I managed to stay warm and just enjoy the ride, the smells and I left Leavenworth early enough to avoid large traffic jams on Rt. 2.

Once through I stopped off at a little town of SKYKOMISH.  I really love these little espresso places with homemade goodies and just nice owners.  So, got gas and of course a coffee and cinnamon homemade bun.  Not a great way to manage low sugars but you only live once right?

My cockpit..all functional I feel and not overkill.

Decided to add a little black & white pics to spice this post up.  I am writing this Monday morning and I am really tired.  Must be just from the pure adrenalin from the ride and the mental control I had to use not to get obsessed with the cold.  These trips, my bike have become like a drug for me.  I have always been addicted to riding but now I feel like I need to ride more than ever.  Maybe I just don’t feel so alone when on the bike.  Justifies being solo in life.  Maybe I just stop over analyzing things?  Sounds like a good idea to me.  I think way too much.

Bridges on their own old way have a sense of beauty as you ride underneath them.  I feel that way and same goes for those freight trains.

Once I hit the west coast area near Seattle the temperature soared to a balmy 7.5C or 45.5F.  This is when I started to notice other bikers on the road.  No longer just me like it was up north and east of the cascades.

This is a very familiar road but each season makes it new and at times better to ride.  Hardly any cars as you can see.

Before I actually went home I stopped of at a friend’s house.  They started out as virtual friends but since Mike bought Cheryl’s F800 I supposed Michelle and Mike are more like “family” ;-).  Went to their house for a few hours, they live near me.  Hung out, talked about our trips and then I headed home in 2.5C.  Warm and comfy i pulled into my garage, but before I did I got to see Mt. Baker, WA in full view. Mt. Baker is always the mountain that is smothered in snow and stands out like a sore thumb this time of year when it’s clear out.

I was recently asked if I would ride into the Polar Vortex again.  The answer is yes, but I would get heated socks and a pant liner to add to my liner and gloves.  If I had that set up this would have been a piece of cake as long as all the heat worked.  I feel I rode safely and stopped at the right time when my right foot froze up before Princeton.  The second and third days I managed to get my circulation going by moving around and I felt much better but granted to the temperature was “warmer”.

I am pleased how this trip turned out.  Loved the views, the people I met, the stares, the comments that I am crazy and just again being out on the bike in the sun and crisp air.

I am off to New York next week for USA Thanksgiving and to be with family and friends.  Haven’t been back for Thanksgiving in a long time.  After I return I will have to plan my next short trip, starting the Winter season of riding.  I actually felt this last trip was an adventure all new to me and it felt like winter.  Until next time.  Happy Thanksgiving to the American readers and thanks for checking out my blog, everyone….I appreciate it.  Leslie 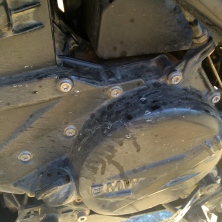 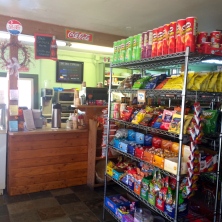 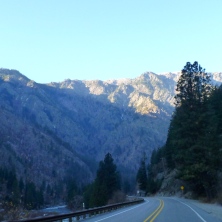 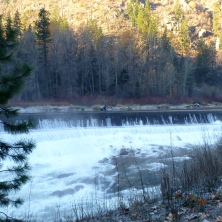 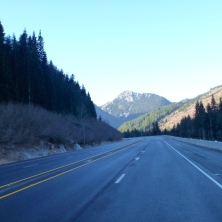 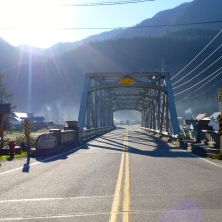 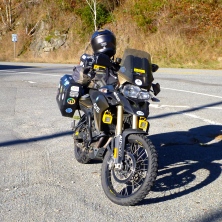 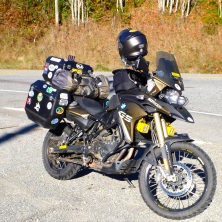 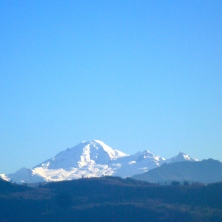