It’s often said that there are two types of riders; those that have crashed and those that will do so eventually. The interesting aspect of this oft-quoted statement is the predilection of riders to hold tightly to the belief that the “crash” experience will never happen to “them”. It’s human nature to deny ourselves acceptance of situations or experiences that are horrifying, scary, traumatic, and downright dangerous. We all want to believe that those “bad things” will happen to someone else; someone who is doing something that they shouldn’t be doing or something that the other person wasn’t prepared for – How many times have we looked at another motorcycle rider and said: “There’s an accident waiting to happen!” We are making an assumption based on some behavior or appearance that the “bad thing” will only happen to those other people.

I was one of those people who felt that way. I began my career riding Harley Davidson motorcycles. I had a variety of the leather jackets and chaps, and I had a HD modular helmet, gloves and boots. I wore my gear with a certain sense of style and panache; after all the general thought was a girl on a huge Harley touring bike – How cool is that? Warm weather riding in Chicago brought a change in my choices – I would ride in jeans, a tank top, and a half helmet. I told myself that I just couldn’t focus correctly on my riding because I was so hot wearing all that “extraneous” gear. Then I came to the decision to broaden my instructor perspective in order to speak to the sport bike riders in our courses. I decided on a BMW K1300S sport touring bike. I went to the dealership late one evening to pick up the bike and ride it home. The next morning I got back into my car, drove back to the dealership and purchased an armored jacket and pants. The mass of the Harley had allowed me to lull myself into a false sense of security and safety; the power to weight ratio on the BMW plus the smaller size made me feel incredibly vulnerable and exposed. I had to mentally adjust and put on the gear to feel comfortable enough to operate the bike.

I currently consider myself a highly trained and experienced rider. That said — I have never been in a crash on any of my numerous bikes or on any of my numerous long distance trips. I have never had a crash teaching training classes. I always had an instinctive feeling that because I did all the right things – the “bad thing” (i.e. the “crash”) would never happen to me. I take on-going educational courses, perform appropriate vehicle maintenance, read extensively, am observant, and am careful about my riding companions, etc. I really wasn’t willing to accept that I could be one of those folks.

The one thing that is never factored into this equation is the “unexpected “circumstance. One night in May of 2013, I went out on my new BMW K1600GT touring bike. I had plans to run an errand on the bike and return home immediately thereafter. I got dressed to go riding; earlier that week my husband had made an offhand comment to me that my armored over pants were not exactly my most flattering fashion statement. It was a warm night, and I remembered his comment. I decided that I would wear all of my normal gear (helmet, jacket, gloves, and riding boots) but tonight I would wear jeans. I got dressed and looked in the mirror. As I looked at the jeans I changed my mind — I pulled them off and switched to my armored BMW pants. I headed out on the bike, and decided to take the expressway route. My trip should have been about 20-25 minutes one way.

As I started down the first section of highway, I was riding in my favorite left lane location. The left lane gives me a “bail out” area (the shoulder) and I have ridden this exact route many times. On this occasion, there was a semi-truck in the center lane. Ahead of me was a panel van, and I was riding in his driver side wheel track. Behind me in the left lane, some distance back but coming up fast, was another vehicle. I followed the van as he began passing the semi-truck. I was sporadically checking my mirrors to track the vehicle approaching from behind. Suddenly, the brakes on the panel van flashed, and then the van moved to the right (into the center lane) in a hard, fast maneuver — into the space directly in front of the semi.

At this point I was able to see directly ahead and — to my great disbelief there was a recliner sofa lying right in the middle of the left lane! My training took over at this point; I was so close to the obstacle that if I swerved to the right I would have hit the semi-truck. To attempt the left swerve would be a gamble – If I miscalculated I could be high sided into oncoming traffic on the other side of the median wall, or if I hooked the right side of the bike on the obstacle it could high side me into traffic or the truck. I had to make a choice and my brain registered that I needed to brake but also that I needed to accept the fact that I was going to hit the object as I was braking. The human mind is an amazing thing; I actually told myself: “I am going to have an accident.” Then: “My new bike.” Then, as the bike lost traction on impact and I watched the bike separate from me: “I am going down.” I then became aware of the sensations of sliding, tumbling, and a grating sound that I heard from inside my helmet. My thoughts then became focused as I tumbled and slid: “I HAVE to get to the wall on the inside shoulder; no matter what happens – get to the wall.” I knew full well that I might survive the crash only to be run down by another vehicle and I focused on spotting the wall. When I finally came to a stop on my back, I picked up my head and saw (to my extreme relief) the wall. I held my hands up like a surgeon and moved them back and forth. Then I moved my legs and rotated my feet. My thoughts: “I’m not paralyzed – everything works!” My next overwhelming thought “HOLY COW!!!! THE GEAR DID ITS’ JOB – JUST AS ADVERTISED!!!!!!!!” I rolled over and got to my feet just to make sure I could – but then was immediately told to lie down by Illinois State Police Accident Scene Investigators who just happened to be 3—4 vehicles back in traffic and who saw the entire incident. They had raced over to position themselves to protect me from on-coming traffic.

The officers scrambled to re-direct traffic, and I was truly frightened for them because they were running around in the dark on the expressway without safety vests on; my biggest fear was that they would be injured or killed as I lay on the shoulder watching. After a few minutes, some wonderful semi-truck driver appeared and positioned his truck to block the traffic so we would be safe. I was transported to the hospital for examination.

The Outcome:
I had not a single scratch, mark, bruise or abrasion on my body. My visor (the source of the grinding noise) took the impact that would have been my right cheek and right eye. My armored pants kept my right leg from being ground to the bone from my hip bone and butt cheek all the way to my ankle. My jacket saved my elbows and wrists and my chest, and my Lee Parks deerskin gloves were shredded but my fingers and hands were pristine and completely undamaged except for 4 cracked fingernails. The troopers who followed and the emergency room staff could not believe the outcome – a high speed highway impact crash with a body slide/tumble of 200 feet had resulted in no injury whatsoever. I had dressed for the “slide” as well as the “ride” and I was alive and well to tell the tale. I was told repeatedly that this was a miracle; the officers were stunned and explained that they never see this type of outcome – that I should play the lottery.

My own truth is that my training and my protective gear had everything to do with my survival and the overall outcome of this accident. I feel complete vindication in my emphatic stand on wearing complete gear every time I get on a motorcycle. The relief on the Illinois State Police officers faces when they realized they wouldn’t have to inform another family that their loved one was seriously injured or dead as part of theirs days’ work and the look of relief on my husband’s face as he looked down on me on the shoulder of the highway was a reinforcement as well – if you don’t want to wear the gear for yourself, then wear it for the people who love you and worry about you every time we take to the road, for the people whose job it is to deal with the aftermath of these accidents, and for the non-riding populace who see us as representatives of our sport. I believe I walked away unscathed for a reason – so that I would be a walking example to riders who think the “bad thing” won’t ever happen to them. I am living proof of how investing and wearing motorcycle safety gear exponentially increases the odds of surviving the unimaginable or unpredictable situations that are motorcycling today. You just never know what might happen – so GEAR UP! 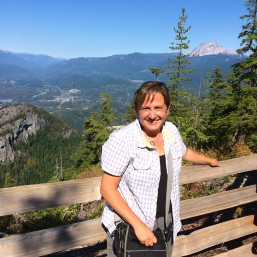 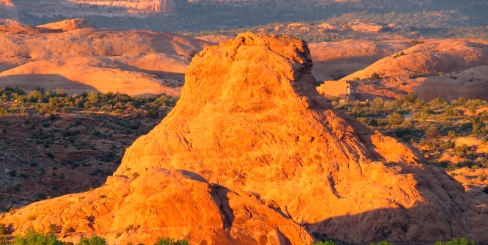 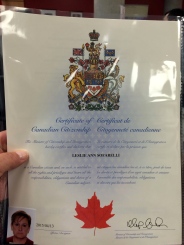 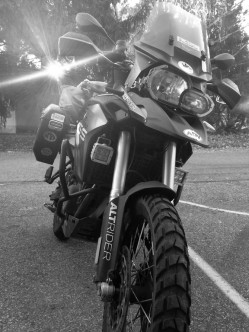