We left Prague around 9:30am towards Germany. Traffic was reasonably light and before long we were in the rural countryside.

Around 11:30am we had a slight setback. We were riding down a gentle hill at about 70kph/45mph (for reference the speed limit was 90kph/55mph) and without any warning at all the bike popped out from under us and we slid to a stop on the tarmac. As I was sliding I could see the bike sliding on its left side ahead of me until it reached the grassy shoulder where the wheels caught and the bike flipped over onto its right side.

We both got straight up to our feet and looked at each other, completely perplexed and somewhat shocked. After determining that nothing hurt, we realised with relief that neither of us were injured and our gear had taken the brunt of the fall. I had slid on my left side and Zev had slid on his bottom, dragging his left arm.

A few seconds later a young chap came along and stopped to help us put the bike upright and then carried on his way. I noticed there was oil all over the engine and tyres and realised we had ridden onto an unnoticed slick of tarry oil. From the direction we were travelling, the angle of the sun made it blend into the road, looking like just another patched area of tarmac.

I called 112 (emergency line) and explained what happened and they sent out the police. Meanwhile I took photographs of the area and the damaged parts of the bike. I called my insurer and went through the details.

An hour later, the police still hadn’t arrived so I called 112 again. The lady explained that they couldn’t find where we were, and I realised in my shaken state I’d given the postcode instead of the road number. Not long afterwards a police van arrived.

The two PCs documented the scene and marked the skid-marks from the bike’s tyres and crash bars. They called the fire department to spread sand over the oil slick and then took our passports, the bike registration and insurance documents and my driving licence, and performed a mandatory breathalyser test which of course read zero.

Finally at about 3pm we finished up and I was presented with my documents and a police report to give to my insurer. I had a look at the bike together with one of the PCs and we couldn’t find any mechanical damage—the crash bars did their job remarkably well without so much as a scratch on the engine casings. However there was quite a lot of cosmetic damage and the panniers took a beating. He could not see any roadworthiness issues and donated a roll of packaging tape to seal off the broken bits of the panner and reattach the left hand guard. With that, off they went. It seems the R1200GS—even the new, allegedly more delicate water-cooled version—is a tough old bastard of a bike.

A testament to why the right gear is important—we both walked away from a crash at almost highway speed without so much as a bruise. A few sore muscles—that’s it. Wearing a t-shirt and shorts, for example, would have resulted in skin and possibly bone grafts, plus time in hospital and countless hours of rehabilitation. Thankfully, neither of us hit our heads on the ground, so the helmets remained undamaged.

That said, there was also an element of luck—we were very lucky there were no other vehicles on the road and that we slid to a stop without striking anything (trees, signposts etc). Of course the mind goes a bit mad with ‘what ifs’ and the like—had I been a little bit to the right in the lane I would have avoided the oil slick all together, or if the oil slick had been mid corner on one of the mountain roads things would have turned out far worse.
It would have been easy to have my insurance repatriate the bike to the UK and fly us home via the most efficient route but I don’t think this would have been the best course of action, as it would have been far too easy to never get on a motorbike again. Put another way, I snowboarded for many, many years when I was younger—statistically a far more dangerous sport than motorbiking—and even after a particularly bad fall where I broke my arm in eight places at once, I was back on the slopes two days later with my arm in a sling (much to my doctor’s chagrin I’m certain).
With this in mind, after the police finished writing their report, we decided to carry on to Wemding as planned, have a good night’s sleep and then decide what to do.
After having another thorough check of the bike to ensure nothing was inhibited with the steering and other mechanical bits we were confident it was undamaged functionally. To make up for lost time we took mainly the motorways and arrived in Wemding at about 7:30pm.
Hotel Ambiente where we were booked appeared locked up, but we found a small note on the door to ring a number. Due to holidays the restaurant was closed but the hotel was still open. We were shown to our rooms which were actually part of the hotel’s spa area so we had access to a beautiful walk-in wet room to have a shower and freshen up after the day’s ordeal.
We had dinner at a restaurant on the other side of the town square and were treated to traditional German fare, including a delicious warm apple strudel with ice cream for dessert. At that point it was time to call it a night. 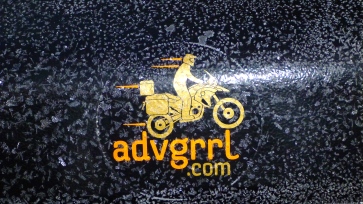 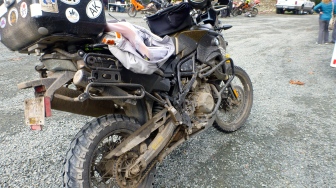 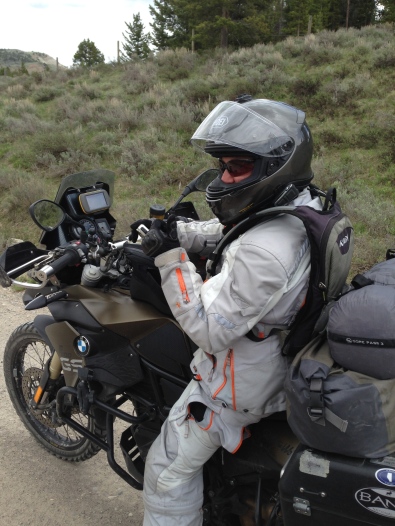